The Mirror have run a piece which claims that a British Bigfoot hunter has found evidence of Bigfoot in Cannock Chase in Staffordshire. The idea of a British Bigfoot may seen new to some of my readers but it certainly isn’t a new concept, but the British ape-man is much rarer that its American cousin. Enter Lee Brickey who claims to have found not one, but TWO whole pieces of evidence of Bigfoot: a footprint and some markings on a tree.

Now, Lee Brickley has form for this sort of thing and has featured numerous times on my blog as over the years he has made a series of ludicrous claims about sightings of Black Eyed Children, Slenderman, and more.Either Lee Brickley is the luckiest paranormal researcher walking the planet… or his standards of evidence are incredibly questionable. I know which of these options I’d put my money on.

There are a couple of issues with the Bigfoot evidence that Brickley has shared, the main issue being that the footprint looks to have been staged. There appears to be no natural movement or weight to the print. Normally, when an animal takes a step, the footprint left behind in soft ground (such as mud or sand) will show the gait and how the weight was pressed into the ground through natural movement. Brickley’s Bigfoot print is completely flat with perfectly lined edges which suggests that it has been forged. I’m not accusing Brickley here but I do think it’s likely he has been tricked by pranksters. 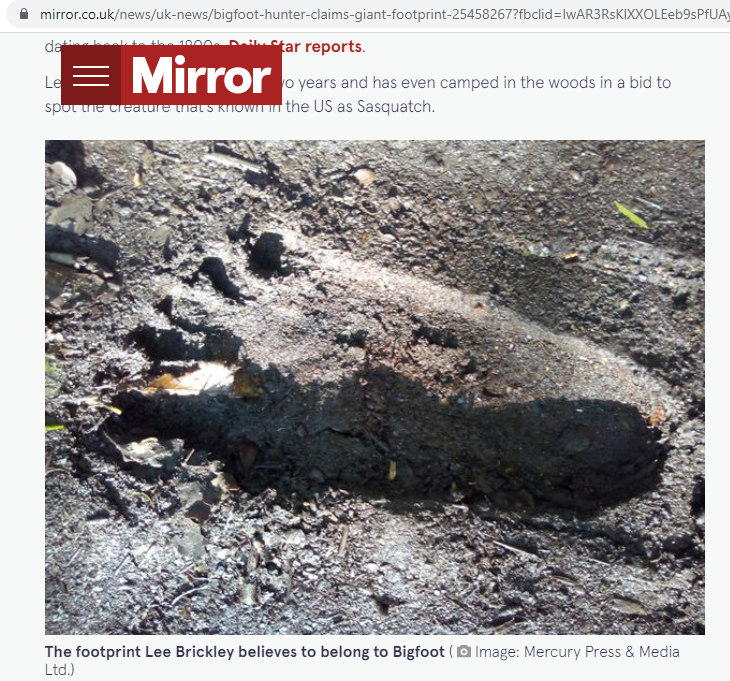 There is also no measuring implement used here so we have to accept at face value that it is ’41cm from toe to heel’ as claimed by Brickley in the Mirror article, which I am not willing to do based on his previous unreliable investigation methods and conclusions.

The other piece of evidence we are presented with comes in the form of deep scratch marks on the trunk of a tree. Brickley also mentions in the article that he found a “mutilated” deer carcus close by, and also says that there is a large population of deer in the area. I’m honestly surprised this isn’t being used as evidence of some sort of predatory Big Cat in the area, but I suppose you have to pigeonhole your “evidence” to suit your chosen cryptid, right?

When Lee Brickley sees some scratch marks on a tree and a deer nearby he thinks “Bigfoot” because he’s looking for Bigfoot. Someone who hunts for evidence of Big Cats in the wild in England would see evidence of a Big Cat because that’s what they’re looking for, but when the article tells us that there are a lot of deer in the area, I see a tree with damage to it from rutting deer. During the Autumn and early Winter, deer are known to “rut” their antlers against trees (and each other…) and the resulting damage can be quite staggering. That’s what I think the tree scratches could be caused by and I think that’s more likely that Bigfoot, don’t you? I mean, come on now…

2 thoughts on “Is This Evidence of British Bigfoot in 2021?”