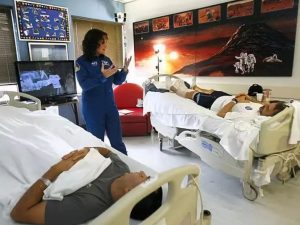 This is the second challenge in the study of artificial gravity bed rest, which is being carried out at the German Aerospace Center (Cologne).

The National Aeronautics and Space Administration (NASA) is working with the German space agency and the European Space Agency to find 24 women to participate in a project in which they will have to spend two months in bed.

This is a new step in the study of artificial gravity bed rest, which was already carried out in March 2021, but only with men. The experiment will take place at the German Aerospace Center in Cologne, and aerospace companies will pay each of them $ 19,000 for it.

With the help of this experiment, scientists want to learn about the effect of special modes of movement on the human body. First of all, they want to find out what can happen to the body after a trip to Mars.

“On behalf of NASA and ESA, the German Aerospace Center is investigating how a body changes outside of gravity. In addition, on Earth, bed rest imitates this state, and we are looking for people who are part of this experiment, “- said one of the researchers.

“They have to eat, exercise and even shower while lying on their stomachs. This will force their bodies to adjust as if they were in space, ”NASA explained in a statement.

To enroll in this project, the volunteer must be between 24 and 55 years old and in good health. Also, no smoking, speak German and be between 153 and 190 centimeters tall.

Registration is done through the website of the German Aerospace Center, and all information about the project can be found on the official NASA website. As soon as the experience is completed, women will receive for participation the amount indicated in the contract.