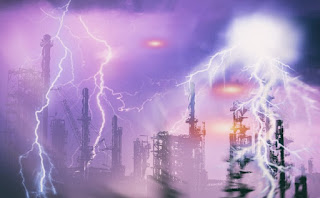 The lightning bolts had strange colors, such as he
had never seen before. Don Armando, a 67-year-old local, told his hitherto
undisclosed story of what happened when he was 20 years old.

The story Armando N tells us, age 67, resident of
Macuspana, Tabasco, regarding an event that was recorded in the archives of
events related to the “UFO phenomenon” as one of the most important
on the national level, was recorded by several newspapers of the time,
including Diario La Prensa.

“It was June 1973. I remember it well. How
could I forget?! I was 20 years old and a newlywed. I went to live in Ciudad
Pemex because I found a job at the petrochemical complex and made a more or
less decent living. I dreamed of saving enough to buy a little home, although I
wouldn’t achieve this goal for many, many years, when I no longer needed it or
wanted it. Such is life.

“Marisela, my wife at the time (I was widowed
in 2005) had no friends in the neighborhood and balked at living there. She
wanted to move back to Villahermosa with her parents, but she had no job and we
only had my salary from the complex. Moving was unthinkable – the distance from
the capital to Ciudad Pemex was considerable. These were difficult years.

“There was a huge thunderstorm the night it
all happened. I was barely getting home when the gusts of wind and lightning
were unleashed, and people locked themselves in because it was frightening to
see. The lightning had strange colors; I’d never seen anything like it. My wife
was very scared – she prayed and lit votive candles, but nothing calmed the
raging storm. It rained from around 8 or 9 at night and did not stop until
morning. There was even a blackout that lasted a few hours…

“At around ten or ten thirty, Marisela – who
couldn’t sleep – decided to look out the window. She screamed. I got up and
looked. I turned out that lights moving back and forth were moving between the
lightning bolts, but they weren’t airplanes. They were like fireballs of
different colors dancing between the lightning bolts.

“The strangest thing is that as the storm
raged on, and these lights were visible, something like bombs and explosions
could be heard from Military Air Base Number 16 of the Mexican Navy. The
explosions shook the ground, barnyard animals and dogs were frightened, and it
was later said that the explosions came from the air base’s artillery, shooting
at the lights.

“What I’m going to tell you next could be
hard to believe, but it’s the truth: the next day, all of us local residents
were alarmed, because there was talk that an object had landed in the pastures
of the El Limón ranch. At first, I didn’t understand what they meant by
‘object’, but I found out later – they meant a flying saucer or UFO, as they
call them now.

“Another very unusual fact was the prints.
They appeared on Sánchez Mármol Street – prints that looked like those of a
giant chicken, some 20 centimeters long, with three toes and a sort of spur in
the back. They didn’t come from anywhere, simply appeared and vanished even in
the sewers, within homes and even between the bedsheets.

“People said that strange, insectoid beings
(others said reptilians) had fallen out of a grey colored vehicle that had
landed behind the Air Force air strip, in the El Limón pastures. There were
several witnesses and people were scared.

“Since we Tabascans are a nosy lot, we went
en masse to see if this was true. Upon arriving, we only found a circle of
burned grass between 3 and 4 meters in diameter and with three round legs, also
circular, which were smaller. Many said there were charred animal carcasses
around the landing site, but I truly didn’t see any.

“Many things were said about this case. That
‘Martians’ were involved, that demons had been released from hell, that the
military had cordoned off the area and secured the alleged landing area. Who
knows? What I do know is that lights in the sky were seen for a long time in
the vicinity of Ciudad Pemex. I find it strange, at first, that there should be
an air base in that location. Why? No one has been able to tell me what it’s
good for.

“Other events have occurred at that air base.
I remember that a Pemex helicopter crashed around that time as it took off from
the air base. Co-workers of mine died in that accident. Obviously, no one
blamed aliens. When it comes to accidents, Pemex stands alone and doesn’t need
any help.

“I’m not sure if I believe in UFOs or not. In
spite of what I saw, I think it could’ve been an experiment of some kind, but I
don’t know…why would they come all the way here to Macuspana?