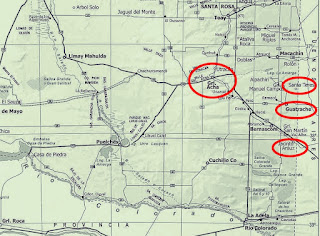 (Jacinto Arauz) – An intense search was carried
out all Tuesday afternoon and evening in southern Jacinto Arauz. When she
vanished from her customary place of residence, she was found yesterday morning
by a patrol of Colonia Santa Teresa in Quinto Meridiano, not far from the
police station at that location, which is 65 kilometers distant from where she
was last seen. The District Attorney’s office of General Acha is looking into
the case.

The woman was taken to the Guatraché Hospital and
then sent to the facility at General Acha in order to conduct more precise
studies, since she could only communicate via writing, seemingly as a result of
being in a state of shock.

At the hospital in Guatraché the woman told
physicians – in written form – that she was in her country house when she heard
a noise and stepped out into the back yard, where she was blinded by a light
and then appeared where she was found, at Meridiano QUinto, 5 kilometers south
of the Guatraché police station, unable to remember a thing. Due to her
condition, she was sent to General Acha in order to carry out tests that may
discard any existing health condition, as she was physically in good shape.

Matías Alvarez, the chief of police in Jacinto
Arauz, told LA ARENA about the mobilization of local and area firefighters,
police personnel, search and rescue personnel with trained dogs, and admitted
that the search was a desperate one. The dogs would follow her trail up to 150
meters of the house before turning away, as if having lost the scent.

Finally, yesterday morning it was learned that she
had been found at the described location and questions soon followed, among
them, given her physical condition, it was impossible for her to walk 65
kilometers, especially as relatives said a thousand meter walk was enough to
tire her out.

For the time being, the situation experienced by
the woman is in the hands of the district attorney’s office in General Acha, as
a missing persons file was opened there at the time.

It all happened Tuesday morning, when the woman’s
partner returned home after a visit to another rural property, only to find her
gone. Being unable to find her, he contacted relatives and made the proper
notifications. Police and firefighters were added to the search, as well as
search-and-rescue personnel with trained dogs.

A frantic search was conducted all night in the
premises and neighboring properties in the area known as Cuatro Esquinas, approximately
25 kilometers southeast of locality of Jacinto Arauz. Early yesterday morning,
a photo was received from the woman’s cellphone, identifying a street that
could not be identified as a local one. Minutes later, it was learned that she
had been found by police at Colonia Santa Teresa.

[Translation (c) 2021 Scott Corrales, IHU with
thanks to Marcelo Metayer]